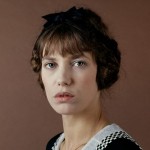 Jane Mallory Birkin was born in Marylebone, London, England. She is an English actress, singer, and songwriter based in France. Her role in several films include: Kaleidoscope, Blowup, Wonderwall, Slogan, Romance of a Horsethief, Dark Places, Lucky Pierre, Death on the Nile,  Evil Under the Sun, Love on the Ground, The Pirate, Leave All Fair, Kung Fu Master(also writer), Comedy!, A Soldier's Daughter Never Cries, Boxes(also director and writer), and Twice Born. Her albums list shown below: Lolita Go Home, Baby Alone in Babylone, Versions Jane, Lost Song, Anthologie, and Talents. Birkin's humanitarian interests have led her to work with Amnesty International on immigrant welfare and the AIDS problem. She has visited Bosnia, Rwanda, Palestine and Israel.