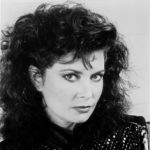 Jane Badler was born in Brooklyn, New York City, New York, USA. She is an American actress and singer. She is best known for her role as Diana, the chief antagonist in NBC's science fiction TV series, V, between 1983 and 1985. Her role in several films include: Easy Kill, Fine Gold, Under the Gun, Needle, and Virtual Revolution. Her role in television include: Terror Among Us(TV film), Penalty Phase(TV film), and Mission: Impossible(TV series). Her albums list shown below: The Devil Has My Double, Tears Again, and Opus. Her singles list shown below: "Four Corners to My Bed", "Men Who Lie", "Snow Carnival Queen", and "I Want a Lot of Boys to Cry at My Funeral".