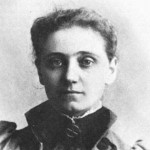 Jane Addams was born in Cedarville, Illinois, USA. She, known as the "mother" of Social Work, was a American settlement activist, social worker, public philosopher, sociologist, author, and leader in women's suffrage and world peace. She co-founded, with Ellen Gates Starr, the first settlement house in the United States, Chicago's Hull House that would later become known as one of the most famous settlement houses in America. In 1931, she became the first American woman to be awarded the Nobel Peace Prize, and is recognized as the founder of the social work profession in the United States. She studied at Rockford University, Rockford, Illinois. She wrote several books include: Democracy and social ethics, Newer ideals of peace, Peace and bread in time of war, Twenty Years at Hull House(memoir), The long road of woman's memory, My friend, Julia Lathrop, Women at the Hague, Women in Public Life, and My Father's Girl.