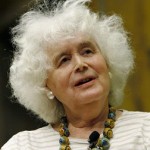 Jan Morris was born in Clevedon, Somerset, England. She is a Welsh historian, journalist and travel writer. She is known particularly for the Pax Britannica trilogy, a history of the British Empire, and for portraits of cities, notably Oxford, Venice, Trieste, Hong Kong, and New York City. She was educated at Lancing College, West Sussex, and Christ Church, Oxford. After the second world war Morris wrote for The London Times(1951-1956) and The Guardian(1957-1962). She has received honorary doctorates from the University of Wales and the University of Glamorgan. She received the Glyndŵr Award for Outstanding Contribution to the Arts in Wales in 1996. In 2005, she was awarded the Golden PEN Award by English PEN for "a Lifetime's Distinguished Service to Literature". She has written several books include: Sultan in Oman(travel), South African winter(travel), Venice(travel, winner of the 1961 Heinemann Award), A Venice Bestiary(travel), Last Letters from Hav(novel, shortlisted for the 1985 Booker Prize for Fiction), and Pleasures of a tangled life(memoir).