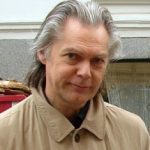 Jan Garbarek was born in Mysen, Norway. He is a Norwegian jazz saxophonist, composer and record producer who is also active in classical music and world music. He grew up in Oslo. When he was 21, he married Vigdis. He is the father of musician and composer Anja Garbarek. He began his recording career in the late 1960s, notably featuring on recordings by the American jazz composer George Russell. His albums list shown below: Esoteric Circle, Afric Pepperbird, Red Lanta(with Art Lande), Dis, Places, Aftenland(with Kjell Johnsen), Wayfarer, Legend of the Seven Dreams, I Took Up the Runes, StAR, Visible World, Twelve Moons, Madar, Rites, and In Praise of Dreams.