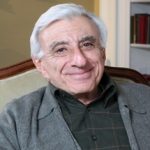 Jamie Farr(Jameel Joseph Farah) was born in Toledo, Ohio, USA. He is an American television, film, and theatre actor. His role in several films include: Blackboard Jungle, Three Violent People, The Greatest Story Ever Told, Ride Beyond Vengeance, Who's Minding the Mint?, With Six You Get Eggroll, The Cannonball Run, Cannonball Run II, Speed Zone, Fearless Tiger, Happy Hour, and A Month of Sundays. His role in television include: M*A*S*H (TV series), AfterMASH(Sitcom), Combat Academy(TV film), and The Chicago Teddy Bears(Sitcom).