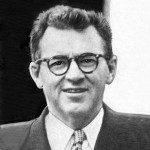 James Thomas Farrell was born in Chicago, Illinois, USA. He was an American novelist. He is most remembered for the Studs Lonigan trilogy, which was made into a film in 1960 and a television series in 1979. He studied at the University of Chicago. He was also active in Trotskyist politics and joined the Socialist Workers Party. He wrote several novels include: Young Lonigan, The Young Manhood of Studs Lonigan, Judgment Day, A World I Never Made, No Star Is Lost, Father and Son, My Days of Anger, The Face of Time, The Silence of History, Lonely for the Future, New Year's Eve, 1929 , and The Dunne Family. In 1973, he was awarded the St. Louis Literary Award from the Saint Louis University Library Associates.