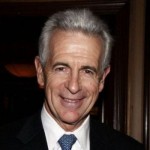 James Naughton was born in Middletown, Connecticut, USA. He is an American actor. He graduated from Brown University and Yale Drama School. His largest fame and first love has been the legitimate theater. He won the Theatre World Award for his performance in Long Day's Journey Into Night in 1971. He won his first Tony Award for Best Actor in a Musical in 1990 for City of Angels. In 1997, he won a second Tony Award with his portrayal of lawyer Billy Flynn in the musical Chicago. His role in several films include: The Paper Chase, A Stranger Is Watching, The Good Mother, First Kid, The Proprietor, Fascination, Factory Girl, Suburban Girl, and Turks & Caicos. His role in television include: Planet of the Apes (TV series), The Bunker(TV film), and Hostages(TV series). He has directed several plays in New York, including the 2002 revival of Thornton Wilder's Our Town, starring his close personal friend Paul Newman, which was filmed for cable TV in 2003.