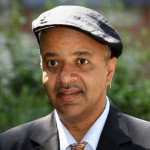 James McBride was born in Brooklyn, New York City, New York, USA. He is an American author, novelist, screenwriter, journalist and musician. He earned an undergraduate degree in music composition from Oberlin College in 1979, after which he earned a master's degree in journalism from Columbia University. As a journalist, he worked on the staffs of many well-known publications, including The Boston Globe, The Washington Post, the Wilmington News Journal, and People magazine. He has written several books include: The Color of Water(autobiography), Miracle at St. Anna(novel), Song Yet Sung(novel), and The Good Lord Bird(novel, Won- National Book Award for Fiction in 2013). He has written several films include: Miracle at St. Anna and Red Hook Summer. He is the tenor saxophonist for the Rock Bottom Remainders, a group of best-selling authors who are lousy musicians. He has written songs for Anita Baker, Grover Washington Jr., Pura Fé, and Gary Burton. On September 22, 2016, President Barack Obama awarded McBride the 2015 National Humanities Medal "for humanizing the complexities of discussing race in America.