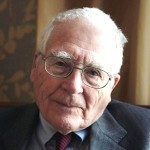 James Ephraim Lovelock was born in Letchworth, Hertfordshire, England. He is an English scientist, environmentalist and futurist. He is best known for proposing the Gaia hypothesis, which postulates that the Earth functions as a self-regulating system. He earned a BS degree from Manchester University in 1941. He received his PhD in Medicine from London School of Hygiene and Tropical Medicine in 1948. He earned his PhD in Biophysics from London University in 1959. In the United States, he has conducted research at Yale, Baylor College of Medicine, and Harvard University. He served as professor at Baylor University College of Medicine from 1961-63. He was elected a Fellow of the Royal Society in 1974. He has been awarded a number of prestigious prizes including the Tswett Medal, the World Meteorological Organization Norbert Gerbier Prize, the Dr A.H. Heineken Prize for the Environment, Volvo Environment Prize, and the Royal Geographical Society Discovery Lifetime award. In 2006, he received the Wollaston Medal, the Geological Society's highest Award, whose previous recipients include Charles Darwin. He has written several books include: Gaia, a new look at life on earth, The Ages of Gaia,  Gaia, Homage To Gaia, The Revenge of Gaia, The Vanishing Face of Gaia, and Gaia Warriors.