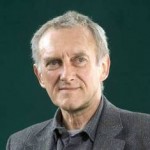 James Kelman was born in Glasgow, Scotland. He is a Scottish writer of novels, short stories, plays, and political essays. He has written several novels include: The Busconductor Hines, A Chancer, A Disaffection(won- James Tait Black Memorial Prize, shortlisted for the Booker Prize), How Late It Was, How Late(won- Man Booker Prize), Translated Accounts, You Have to Be Careful in the Land of the Free, Kieron Smith, Boy, Mo Said She Was Quirky, and Dirt Road. He has written several collection of essays include: Some Recent Attacks and And The Judges Said. He has written several collection of short stories include: An Old Pub Near the Angel, Not Not While The Giro, Greyhound for Breakfast, The Burn, The Good Times, and If It Is Your Life. He is the author of a television screenplay, The Return, and has written many plays for radio and theatre. He later took up positions at the Goldsmiths College London and the University of Glasgow, where he taught creative writing.