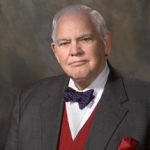 James C. Humes is an American author and former presidential speechwriter who worked for Ronald Reagan, George H. W. Bush, Gerald Ford, and Dwight Eisenhower. He has served as a communications advisor to major U.S. corporations, including IBM and DuPont. Communication and Leadership professor at the University of Southern Carolina, he has written several books about this topic include: Churchill, speaker of the century(nominated- Pulitzer Prize), Podium humor, The Wit and Wisdom of Winston Churchill, The Wit & Wisdom of Abraham Lincoln, Nixon's Ten Commandments of Leadership and Negotiation, Eisenhower and Churchill, Speak like Churchill, stand like Lincoln, Which President Killed a Man?, The Wit & Wisdom of Ronald Reagan, The Wit & Wisdom of FDR, Target Churchill(with Warren Adler), Churchill: The Prophetic Statesman, and Presidents and Their Pens.