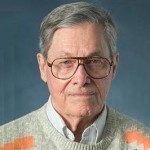 James Edwin Gunn was born in Kansas City, Missouri, USA. He is an American science fiction writer, author, editor, novelist and professor. His work as an editor of anthologies includes the six-volume Road to Science Fiction series. He earned a BS degree in Journalism in 1947 and an MA degree in English in 1951, both from the University of Kansas. He is a professor emeritus of English, and the founding director of the Center for the Study of Science Fiction, both at the University of Kansas. He has written several novels include: Star Bridge(with Jack Williamson), This Fortress World, Station in Space, The Listeners, The Dreamers(Nominations: Locus Award for Best Science Fiction Novel), Inside science fiction, Human Voices, Gift from the Stars, Paratexts, and Transgalactic. He has written other books include: Transcendental, Some Dreams Are Nightmares, The Immortals, Station in Space, and Kampus. His nonfiction works include: Isaac Asimov(Hugo Award for Best Related Work), The New Encyclopedia of Science Fiction(Nominations: Hugo Award for Best Related Work, Locus Award for Best Non-Fiction), and Speculations on Speculation(Nominations: Locus Award for Best Non-Fiction).