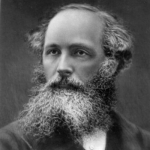 James Clerk Maxwell was born in Edinburgh, Scotland. He was a Scottish scientist in the field of mathematical physics. His most notable achievement was to formulate the classical theory of electromagnetic radiation, bringing together for the first time electricity, magnetism, and light as manifestations of the same phenomenon. He studied at the University of Edinburgh, Peterhouse College, Cambridge University, and Trinity College, Cambridge University. He served as a professor at Marischal College, Aberdeen from 1856-60, Chair of Physics and Astronomy, King's College London from 1860-68, and Cavendish Professor of Physics, Cambridge University from 1871-79. He received  Rumford Medal in 1860. He wrote several books include: A Dynamical Theory of the Electromagnetic Field, Theory of Heat, A Treatise on Electricity and Magnetism, An Elementary Treatise on Electricity, and Matter and Motion.