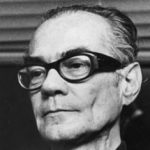 James Benjamin Blish was born in East Orange, New Jersey, USA. He was an American author, critic and novelist. He also wrote literary criticism of science fiction using the pen-name William Atheling, Jr. He trained as a biologist at Rutgers and Columbia University, and spent 1942–1944 as a medical technician in the United States Army. After the war he became the science editor for the Pfizer pharmaceutical company. He wrote several novels include: Jack of Eagles, They Shall Have Stars, A Case of Conscience(Hugo Award for Best Novel), The Duplicated Man(with Robert Lowndes), A Life for the Stars, Doctor Mirabilis, Black Easter(nominated- Nebula Award for fantasy novel), Spock Must Die!, The Day After Judgment, and The Quincunx of Time. He wrote other books include: The Frozen Year, The Seedling Stars(short stories), Fallen Star, Galactic Cluster, The Star Dwellers, Welcome to Mars!, Get Out of My Sky(novella), and The Vanished Jet.