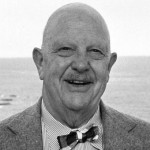 James Andrew Beard was born in Portland, Oregon, USA. He was an American chef, cookbook writer, teacher, syndicated columnist and television personality. He was a champion of American cuisine who taught and mentored generations of professional chefs and food enthusiasts. He studied at Reed College,  Portland, Oregon. In 1946, he appeared on an early NBC television cooking show, I Love to Eat, beginning his ascent as an American food authority. He wrote several books include: Fowl And Game Cookery, The Fireside Cook Book, Fish cookery, The James Beard cookbook, The complete book of outdoor cookery, Menus for Entertaining, Beard on Bread, and Beard on Pasta.