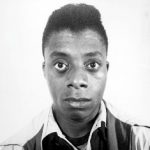 James Arthur Baldwin was born in Harlem, New York City, New York, USA. He was an American novelist, essayist, playwright, poet, activist and social critic. He wrote several books include: Go Tell It on the Mountain(Semi-autobiographical novel), The Amen Corner(play), Notes of a Native Son(essays), Giovanni's Room(novel), Nobody Knows My Name(essays), Another Country(novel), The Fire Next Time(essays), Blues for Mister Charlie(play), Going to Meet the Man(Short stories), Tell Me How Long the Train's Been Gone(novel), No Name in the Street(essays), If Beale Street Could Talk(novel), The Devil Finds Work(essay), Just Above My Head(novel), Jimmy's Blues(poem), The Evidence of Things Not Seen(essays), The Price of the Ticket(essays), Jimmy's Blues and Other Poems, A Rap on Race(with Margaret Mead), A Dialogue(with Nikki Giovanni), and Little Man Little Man(children's novel). He wrote several films include: Go Tell It on the Mountain(TV film), Where the Heart Is, and I Am Not Your Negro(nominated- Academy Award for Best Documentary Feature).