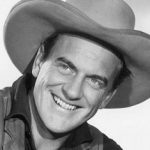 James Arness was born in Minneapolis, Minnesota, USA. He was an American actor, best known for portraying Marshal Matt Dillon for 20 years in the television series Gunsmoke. In Europe, he reached cult status for his role as Zeb Macahan in the western series How the West Was Won. He served as a rifleman with the U.S. 3rd Infantry Division, and was severely wounded during Operation Shingle, at Anzio, Italy. His role in several films include: The Farmer's Daughter, Roses Are Red, Battleground, Two Lost Worlds, Iron Man, Carbine Williams, Horizons West, Island in the Sky, Her Twelve Men, Many Rivers to Cross, and The First Traveling Saleslady.