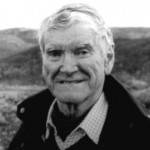 James Archibald Houston was born in Toronto, Canada. He was a Canadian artist, steuben glass designer, children's author and film-maker who played an important role in the recognition of Inuit art and introduced printmaking to the Inuit. The Inuit named him "Saumik," which means "the left-handed one". He educated at the Ontario College of Art, Académie de la Grande Chaumière in Paris and in Japan where he studied printmaking. In 1962, he moved to New York and became associate director of design with Steuben Glass. He also wrote for adults and produced documentary and animated films. He wrote several books include: Tikta'liktak, The White Archer, The White Dawn(novel), Frozen Fire, Ghost Fox, Long Claws, Black Diamonds, Ice Swords, Whiteout, Drifting Snow, and Confessions of an Igloo Dweller.