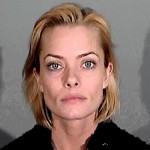 Jaime Elizabeth Pressly was born in Kinston, North Carolina, USA. She is an American actress and model. She spent her childhood and early teenage years training as a gymnast, which led her to modeling jobs. At age fourteen, she appeared on her first cover, Teen Magazine. At fifteen, she left school and went to Japan on a modeling contract. Her role in several films include: Poison Ivy: The New Seduction, Against the Law, Ringmaster, 100 Girls, Joe Dirt, Demon Island, Torque, DOA: Dead or Alive, I Love You, Man, Beauty & the Briefcase, and A Haunted House 2. Her role in several TV series include: Push, Jack & Jill, My Name Is Earl(Won- Primetime Emmy Award for Outstanding Supporting Actress- Comedy Series, Nominated- Golden Globe Award for Best Supporting Actress- Series, Miniseries or TV Film), I Hate My Teenage Daughter, Jennifer Falls, and Mom.