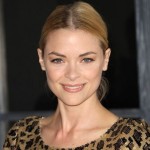 Jaime King was born in Omaha, Nebraska, USA. She is an American actress and model. A successful model, she was discovered at age 14 in 1993 and appeared in Vogue, Mademoiselle and Harper's Bazaar, among other fashion magazines. In 1998, she began co-hosting MTV's fashion series, House of Style, with fellow model turned actress Rebecca Romijn. In 2004, she, along with Halle Berry, Julianne Moore, and Eva Mendes was chosen as a spokesmodel for a high-profile ad campaign for Revlon. From 1998, she moved into acting, taking small film roles. Her role in several films include: Happy Campers, Pearl Harbor, Slackers, Bulletproof Monk, White Chicks, Sin City, True True Lie, My Bloody Valentine 3D, Waiting for Forever, Mother's Day, Silent Night, and Barely Lethal. Her role in several TV series include: Kitchen Confidential, The Class, My Generation, and Hart of Dixie.