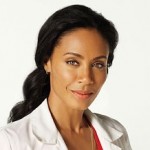 Jada Koren Pinkett–Smith was born in Baltimore, Maryland, USA. She is an American actress, singer-songwriter and businesswoman. Her role in several films include: Menace II Society, Demon Knight, The Nutty Professor, Set It Off, Scream 2, Woo, Ali, The Matrix Reloaded, The Matrix Revolutions, The Women, Magic Mike XXL, Bad Moms, and Girls Trip. Her role in television include: A Different World, Hawthorne, and Gotham. She launched her music career in 2002, when she helped create the metal band Wicked Wisdom, for which she is a singer and songwriter. After opening her music company 100% Womon Productions, she created her own fashion label, Maja in 1994. The clothing line features women's T-shirts and dresses embellished with the slogan "Sister Power", sold primarily through small catalogs. In 1997, she married actor Will Smith. They have two children, Jaden and Willow.