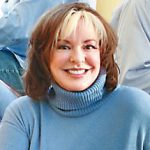 Jacquelyn Mitchard was born in Chicago, Illinois, USA. She is an American journalist and novelist. She is the number one New York Times bestselling author of twelve novels for adults. She studied creative writing for three semesters under Mark Costello at the University of Illinois at Urbana-Champaign. She became a newspaper reporter in 1979, eventually achieving a position as lifestyle columnist for the Milwaukee Journal Sentinel newspaper. Her weekly column, The Rest of Us: Dispatches from the Mother Ship, appeared in 125 newspapers nationwide until she retired it in 2007. She married Dan Allegretti, a reporter for The Capital Times, and the couple had three children. She is a professor of Creative Writing at Vermont College of Fine Arts. She has written several novels include: The Deep End of the Ocean, The most wanted(nominated- Britain's Orange Prize for Fiction), A Theory of Relativity, Twelve times blessed, The Breakdown Lane, Cage of Stars, Still Summer, Look Both Ways, All We Know of Heaven, Now You See Her, No Time to Wave Goodbye, and Two If by Sea. She has written other books include: Second Nature, The Midnight Twins, What We Saw at Night, and The rest of us. She has written several children books include: Rosalie, my Rosalie, Baby bat's lullaby, and Starring Prima!.