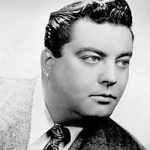 John Herbert "Jackie" Gleason was born in Brooklyn, New York City, New York, USA. He was an American comedian, actor and musician. He was known for his brash visual and verbal comedy style, exemplified by his character Ralph Kramden in the television series The Honeymooners. His role in several films include: Navy Blues, Lady Gangster, Escape from Crime, The Desert Hawk, The Hustler, Gigot(also writer), Soldier in the Rain, How to Commit Marriage, Mr. Billion, The Toy, and Nothing in Common. His albums list shown below: Music for Lovers Only, Lonesome Echo, Riff Jazz, Oooo!(with Artie Malvin), The Gentle Touch, Gigot, The Gold of Christmas, My Devotion, Fascination, Hey There, Cozy Like A Bear, and Stars at Night.