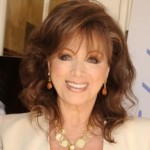 Jacqueline Jill "Jackie" Collins was born in Hampstead, London, England. She was an English romance novelist. She wrote 32 novels, all of which appeared on The New York Times bestsellers list. Eight of her novels have been adapted for the screen, either as films or television miniseries. She was the younger sister of Dame Joan Collins. She wrote several novels include: The World Is Full of Married Men, The Stud, Sunday Simmons & Charlie Brick, Lovehead, The World Is Full of Divorced Women, The Bitch, Chances, Hollywood Wives, Hollywood Husbands, Lady Boss, Vendetta, Dangerous Kiss, Drop Dead Beautiful, and Poor Little Bitch Girl. Her role in several films include: Barnacle Bill, Rock You Sinners, Intent to Kill, Passport to Shame, and The Shakedown. She wrote several films include: The Stud, Yesterday's Hero, The Bitch, Hollywood Wives: The New Generation, and Paris Connections.