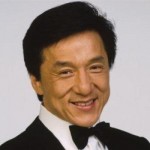 Chan Kong-sang, known professionally as Jackie Chan was born in Victoria Peak, Hong Kong. He is a Hong Konger actor, film director, film writer, stunt performer, singer and martial artist. In his movies, he is known for his acrobatic fighting style, comic timing, use of improvised weapons, and innovative stunts, which he typically performs himself. He has trained in Kung Fu and Hapkido. He has been referenced in various pop songs, cartoons, and video games. He has released 20 albums since 1984 and has performed vocals in Cantonese, Mandarin, Japanese, Taiwanese and English. He often sings the theme songs of his films, which play over the closing credits. Chan's first musical recording was "Kung Fu Fighting Man", the theme song played over the closing credits of The Young Master. He is also a notable philanthropist. In 2015, Forbes magazine estimated his net worth to be $350 million. His role in several films include: The Blade Spares None, Big and Little Wong Tin Bar, The Young Master, Project A, Project A Part II, Police Story 2, 1911, CZ12, Enter the Dragon, Little Tiger of Canton, All in the Family, and Shinjuku Incident. He directed several films include: The Young Master(also writer), Project A(also writer), Project A Part II(also writer), Police Story 2(also writer), 1911, and CZ12(also writer).