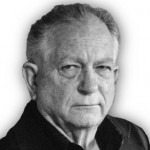 John Holbrook "Jack" Vance was born in San Francisco, California, USA. He was an American mystery, fantasy, and science fiction writer. He won the World Fantasy Award for Life Achievement in 1984. He wrote several novels include: Cugel's Saga, Emphyrio, Big Planet, The Languages of Pao, The Blue World, To Live Forever, Star King, The Gray Prince, The Killing Machine, Alastor Cluster, City of the Chasch, The Dirdir, The Book of Dreams, The Pnume, Maske: Thaery, The Five Gold Bands, Araminta Station, The Anome, The Palace of Love, Trullion, Space Opera, The Face, Servants of the Wankh, Wyst, Throy, Slaves of the Klau, Ecce and Old Earth, Madouc(World Fantasy Award), and Marune. He wrote other books include: The Dying Earth(Fantasy short story collection), The Eyes of the Overworld, The Dragon Masters(Hugo Award for Best  novella), The Last Castle(Hugo Award for Best Novelette, Nebula Award for Best Novella), Tales of the Dying Earth(short story), Rhialto the Marvellous(collection of one essay and three fantasy stories), The Moon Moth(short story), The Houses of Iszm(novella), Son of the Tree(novella), Eight Fantasms and Magics(collection of short stories), and Telek(novella).