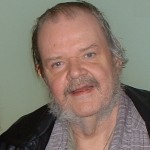 Jack Laurence Chalker was born in Howard Park, Baltimore, Maryland, USA. He was an American science fiction novelist. He was also a Baltimore City Schools history teacher in Maryland for 12 years, retiring during 1978 to write full-time. He earned a BA degree in English from Towson University in Towson, Maryland. He received an MA degree in Liberal Studies from Johns Hopkins University in Baltimore. He wrote several novels include: And the Devil Will Drag You Under, Twilight at the Well of Souls, Lilith: A Snake in the Grass, The Devil's voyage, The Identity Matrix, Warriors of the Storm, The Red Tape War(with George Alec Effinger and Mike Resnick), Shadow of the Well of Souls, Gods of the Well of Souls, The March Hare Network, The Sea is Full of Stars, and The Moreau Factor.