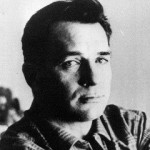 Jack Kerouac was born in Lowell, Massachusetts, USA. He was an American novelist and poet. He wrote several novels include: The Town and the City, On the Road, Doctor Sax, The Dharma Bums, Desolation Angels, Visions of Cody, The Sea Is My Brother, Big Sur, Vanity of Duluoz, Visions of Gerard, Maggie Cassidy, Book of Dreams, and Pic. He wrote several poems include: Mexico City Blues, Scattered Poems, Book of Haikus, Book of Sketches, and Old Angel Midnight.