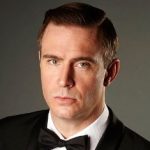 Jack Arthur Davenport was born in Wimbledon, London, England. He is an English actor. His role in several films include: Tale of the Mummy, The Talented Mr. Ripley, Offending Angels, Gypsy Woman, The Libertine, The Wedding Date, Pirates of the Caribbean:Dead Man's Chest, The Boat That Rocked, Kingsman: The Secret Service, and A United Kingdom. His role in television include: This Life, Ultraviolet, Coupling, Swingtown, FlashForward, and Smash.