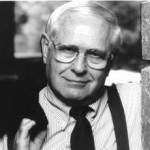 Jack Northman Anderson was born in Long Beach, California, USA. He was an American newspaper columnist, syndicated by United Features Syndicate, considered one of the fathers of modern investigative journalism. He won the 1972 Pulitzer Prize for National Reporting for his investigation on secret American policy decision-making between the United States and Pakistan during the Indo-Pakistani War of 1971. His writing career began at his local newspaper, The Murray Eagle. As a syndicated columnist, Jack Anderson’s column, “Washington Merry-Go-Round,” appeared in more than 1,000 newspapers across the country. He wrote several books include: The Case against Congress(with Drew Pearson), Confessions of a muckraker, Alice in Blunderland(with John Kidner), The Cambodia File(with Bill Pronzini), The Japan Conspiracy, Millennium, Peace, war, and politics, and The Saudi connection.