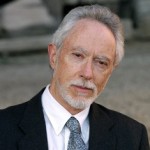 John Maxwell "J. M." Coetzee was born in Cape Town, South Africa. He is a South African novelist, essayist, literary critic, translator and recipient of the 2003 Nobel Prize in Literature. He relocated to Australia in 2002 and lives in Adelaide. He became an Australian citizen in 2006. He earned a BA degree in 1960 and an MA degree in 1963 from the University of Cape Town. He received his PhD from the University of Texas in 1969. His doctoral dissertation was on the early fiction of Samuel Beckett. He has written several novels include: Dusklands, In the Heart of the Country, Waiting for the Barbarians, Life & Times of Michael K(won the Booker Prize for 1983), Foe, Age of Iron, The Master of Petersburg, Disgrace(won the Booker Prize for 1999), Elizabeth Costello, Slow Man, Summertime, The Childhood of Jesus, and The Schooldays of Jesus. He has written several other books include: The Lives of Animals(novella), Boyhood(Autobiographical novel), Youth(Autobiographical novel), White Writing( essays), and Inner Workings(essays). from 1984- 2003 he also taught frequently in the United States: at the State University of New York, Johns Hopkins University, Harvard University, Stanford University, and the University of Chicago, where for six years he was a member of the Committee on Social Thought.