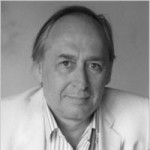 James Graham "J. G." Ballard was born in Shanghai, China. He was an English novelist, short story writer and essayist. He wrote several novels include: The Wind from Nowhere, The Drowned World, The Burning World, The Crystal World, Crash, Concrete Island, High-Rise, The Unlimited Dream Company, Hello America, Empire of the Sun(won- James Tait Black Memorial Prize, shortlisted- Man Booker Prize), The Day of Creation, Rushing to Paradise, Cocaine Nights, Super-Cannes, Millennium People, and Kingdom Come. His short story collections include: Passport to Eternity, The Terminal Beach, The Impossible Man, The Overloaded Man, The Disaster Area, The Day of Forever, Vermilion Sands, Myths of the Near Future, Memories of the Space Age, and War Fever. His non-fiction works include: A User's Guide To The Millennium: Essays And Reviews and Miracles of Life(autobiography).