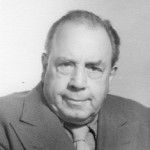 John Boynton Priestley was born in Manningham, Bradford, West Yorkshire, England. He was an English novelist, playwright and screenwriter. He studied at Trinity Hall, Cambridge. He wrote several novels include: Benighted, The Good Companions(won-James Tait Black Memorial Prize), Angel Pavement, Let the People Sing, Bright Day, Jenny Villiers, and The Magicians. He wrote several plays include: Dangerous Corner, Laburnum Grove, Eden End, Time and the Conways, I Have Been Here Before, When We Are Married, Johnson Over Jordan, and An Inspector Calls. He wrote several films include: The Old Dark House, Jamaica Inn, They Came to a City, The Foreman Went to France, Last Holiday, Look Up and Laugh, and Britain at Bay. The University of Bradford awarded Priestley the title of honorary Doctor of Letters in 1970, and he was awarded the Freedom of the City of Bradford in 1973.