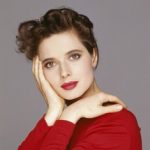 Isabella Fiorella Elettra Giovanna Rossellini was born in Rome, Italy. She is an Italian actress, filmmaker, author, philanthropist, and model. She is noted for her successful tenure as a Lancôme model. At the age of 28, her modeling career began, when she was photographed by Bruce Weber for British Vogue and by Bill King for American Vogue. Her image has appeared on such magazines as Marie Claire, Harper's Bazaar, Vanity Fair, and ELLE. She received US$100,000 from Disney to help with her conservation efforts in those two organizations. She is also a National Ambassador for the U.S. Fund for UNICEF. She has written several books include: Some of Me and Isabella Rossellini: Looking at Me: On Pictures and Photographs. Her role in several films include: A Matter of Time, Blue Velvet(Independent Spirit Award for Best Female Lead), Tough Guys Don't Dance, Siesta, Death Becomes Her(Saturn Award for Best Supporting Actress), Big Night, Empire, The Architect, Two Lovers, Keyhole, Closet Monster, and Joy. Her role in television include: Crime of the Century(TV film, Nominated—Golden Globe Award for Best Actress), Merlin (miniseries), Don Quixote(TV film), Monte Walsh(TV film), Earthsea (miniseries), Napoléon (miniseries), Alias (TV series), and Green Porno(TV series, also director).