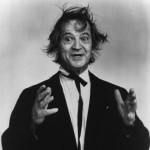 Irwin Corey was born in Brooklyn, New York City, New York, USA. He was an American stand-up comedian, film actor and activist. His role in several films include: How to Commit Marriage, Fore Play, Car Wash, Thieves, Chatterbox, Fairy Tales, Stuck on You!, Crackers, That's Adequate, Jack, The Perils of P.K., I'm Not Rappaport, The Boys Behind the Desk, and The Curse of the Jade Scorpion.