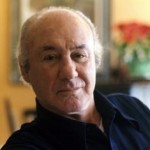 Irving Stone was born in San Francisco, California, USA. He was an American historical biographical novelist. He earned a BA degree in Political Science and Economics from the University of California, Berkeley in 1923. He earned an MA degree in Economics from the University of Southern California in 1924. He wrote several novels include: Lust for Life, Immortal Wife, Adversary in the House, The President's lady, Love is Eternal, The Agony and the Ecstasy, Those Who Love, The Passions of the Mind, The Greek Treasure, The Origin, and Depths of Glory. He wrote other books include: Clarence Darrow for the Defense(biography), They Also Ran(biography), Earl Warren(biography), and Men to Match My Mountains(Spur Award for Best Nonfiction).