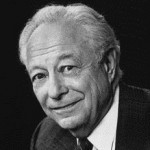 Irving Kristol was born in Brooklyn, New York City, New York, USA. He was an American editor, essayist and publisher who was dubbed the "godfather of neo-conservatism." As the founder, editor, and contributor to various magazines, he played an influential role in the intellectual and political culture of the last half-century. He received his BA degree(History) from the City College of New York in 1940. He wrote in Commentary magazine from 1947 to 1952, co-founder of the British-based Encounter from 1953 to 1958, editor of The Reporter from 1959 to 1960, co-founder and co-editor of The Public Interest from 1965 to 2002. He was founder and publisher of The National Interest from 1985 to 2002. In July 2002, he received the Presidential Medal of Freedom, the nation's highest civilian honor. He wrote several books include: On the Democratic Idea in America, Two Cheers for Capitalism, Reflections of a Neoconservative, On Jews and Judaism, and Neoconservatism: The Autobiography of an Idea.