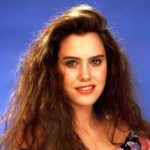 Ione Skye Lee was born in Hampstead, London, England. She is an English-American actress, the daughter of folk singer/songwriter Donovan and model Enid Karl. Her father is Scottish and her mother is an American from a Jewish family. She is the younger sister of Camp Freddy singer Donovan Leitch, who is married to former model Kirsty Hume. She grew up in Los Angeles, San Francisco, and Connecticut. She attended Immaculate Heart High School and Hollywood High School for the Performing Arts in 1987. Her role in several films include: River's Edge, Say Anything..., Mindwalk, Gas Food Lodging, Girls in Prison, Dream for an Insomniac, Free, Fever Pitch, Haunt, Return to Babylon, Dear Eleanor, Kitty, and XOXO. Her role in television include: Napoleon and Josephine: A Love Story(TV series) and Tower of the Firstborn(TV film).