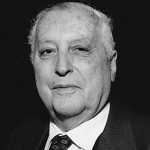 Ilya Romanovich Prigogine was born in Moscow, Russia. He was a Russian-born Belgian physical chemist and Nobel Laureate(for Chemistry in 1977) noted for his work on dissipative structures, complex systems, and irreversibility. He earned a BS degree in Chemistry from the University of Brussels in 1938. He received his PhD in Chemistry from the University of Brussels in 1941. He served as a professor at the University of Brussels, and professor of Physics and Chemical Engineering at the University of Texas, Austin. In 1967, he co-founded the Center for Thermodynamics and Statistical Mechanics, now the Center for Complex Quantum Systems at Austin, Texas. In 1955, he was awarded the Francqui Prize for Exact Sciences. For his study in irreversible thermodynamics, he received the Rumford Medal in 1976. He wrote several books include: Chemical Thermodynamics, Nonequilibrium Statistical Mechanics, From Being To Becoming, Order out of chaos, The end of certainty, Modern Thermodynamics(with Dilip Kondepudi), Advances in Chemical Physics(with Stuart A. Rice), and Is future given?