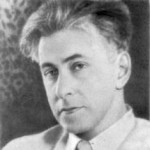 Ilya Grigoryevich Ehrenburg was born in Kiev, Ukraine. He was a Russian writer, novelist, poet, Propagandist, journalist and translator. He is among the most prolific and notable authors of the Soviet Union; he published around one hundred titles. He became known first and foremost as a novelist and a journalist-in particular, as a reporter in three wars including first world war, spanish civil war and the second world war. He wrote several books include: Julio Jurenito, A Street in Moscow, Out of Chaos, The Fall of Paris(novel), The Tempering of Russia, European Crossroad, The Thaw(novel), The Ninth Wave, The Life of the Automobile(novel), The storm(novel), and People, Years, Life(memoir). He received many awards and honors, including Stalin Prize in 1942, Stalin Peace Prize in 1952, Order of Lenin, Order of the Red Banner of Labour, Order of the Red Star, and Order of the Legion of Honour.