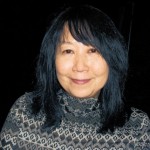 Ikue Mori, also known as Ikue Ile was born in Tokyo, Japan. She is a Japanese drummer, composer, and graphic designer. In 1977, she went to New York City, initially for a visit, but she fell into the music scene, and has remained in New York since. Her first musical experience was as the drummer for seminal no wave band DNA, which also featured East Village hero Arto Lindsay. After DNA disbanded, she became active in the New York experimental music scene. In 1995, she began collaborating with Japanese bass guitarist Kato Hideki, and together with experimental guitarist Fred Frith, they formed Death Ambient. The trio released three albums, Death Ambient, Synaesthesia and Drunken Forest. Her albums list shown below: Hex Kitchen, One Hundred Aspects of the Moon, Phantom Orchard(with Zeena Parkins), and Alien Huddle(with Sylvie Courvoisier, Lotte Anker). She often records on Tzadik, as well as designing the covers for many of their albums. She has drawn inspiration from visual arts. She received a 2005-2006 Foundation for Contemporary Arts Grants to Artists Award.