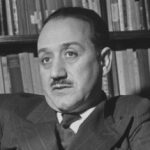 Ignazio Silone was born in Pescina, Italy. He was an Italian author, novelist and politician. He was nominated for the Nobel prize for literature ten times. He lost many family members, including his mother, in the 1915 Avezzano earthquake. His father had died in 1911. He joined the Young Socialists group of the Italian Socialist Party, rising to be their leader. He was a founding member of the breakaway Italian Communist Party in 1921, and became one of its covert leaders during the Fascist regime. He was Member of Chamber of Deputies from 1946-1948. He wrote several books include: Fontamara(novel), Bread and Wine(novel), The school for dictators, The Living Thoughts of Mazzini, The seed beneath the snow, The Abruzzo trilogy(novel), The God that Failed(six essays- with André Gide, Richard Wright, Stephen Spender, Arthur Koestler and Louis Fischer), Emergency Exit, A handful of blackberries, Luca's Secret(novel), and Story of a Humble Christian(historical novel). In 1969, he was awarded the Jerusalem Prize.