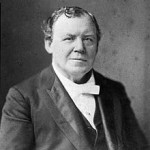 Ignatius Loyola Donnelly was born in Philadelphia, Pennsylvania, USA. He was an American politician, writer and lawyer. He is known primarily now for his theories concerning Atlantis, Catastrophism, and Shakespearean authorship, which many modern historians consider to be pseudoscience and pseudohistory. He was a clerk for Benjamin Brewster, who later became Attorney-General of the United States. He was admitted to the bar in 1852. He served as lieutenant governor of Minnesota from 1860–1863. He served as a Republican Congressman from Minnesota in the 38th, 39th, and 40th congresses from 1863–1869, a state senator from 1874–1878 and 1891-1894, and a state representative from 1887-1888 and 1897-1898. He was also an early supporter of women's suffrage. He wrote several books include: Atlantis: The Antediluvian World, Ragnarok: The Age of Fire and Gravel, The Great Cryptogram, Caesar's Column(novel), Doctor Huguet(novel), and The golden bottle.