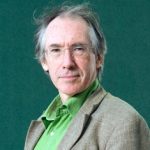 Ian Russell McEwan was born in Aldershot, Hampshire, England. He is an English novelist and screenwriter. He earned his degree in English literature from the University of Sussex in 1970. He earned his master's degree in literature from the University of East Anglia in 1971. He has written several novels include: The Cement Garden, The Comfort of Strangers, The Child in Time, The Innocent, Black Dogs, Enduring Love, Amsterdam(Won- Man Booker Prize for Fiction), Atonement, Saturday, On Chesil Beach, Solar, Sweet Tooth, The Children Act, and Nutshell. His Short story collections including First Love, Last Rites and In Between the Sheets. He has written two TV plays include: Jack Flea's Birthday Celebration and The Imitation Game. He has written several films include: The Ploughman's Lunch, Soursweet, The Good Son, On Chesil Beach, and The Children Act. In 2011, he was awarded the Jerusalem Prize for the Freedom of the Individual in Society.