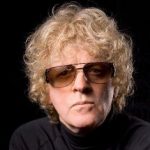 Ian Hunter Patterson, known as Ian Hunter was born in Oswestry, Shropshire, England. He is an English singer-songwriter and musician who is best known as the lead singer of the English rock band Mott the Hoople from its inception in 1969 to its dissolution in 1974, and at the time of its 2009 reunion. He embarked on a solo career despite ill health and disillusionment with commercial success, and often worked in collaboration with Mick Ronson, David Bowie's sideman and arranger from the Ziggy Stardust and the Spiders from Mars period. His albums list shown below: Ian Hunter, All American Alien Boy, Overnight Angels, Welcome to the Club(Live album), Short Back 'n' Sides, Dirty Laundry, The Artful Dodger, Rant, and Shrunken Heads. His singles list shown below: "Once Bitten, Twice Shy", "Who Do You Love", "Just Another Night", "All of The Good Ones are Taken", and "When the World Was Round".