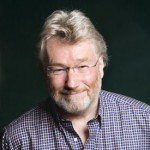 Iain Banks was born in Dunfermline, Fife, Scotland. He was a Scottish novelist. He wrote mainstream fiction under the name Iain Banks and science fiction as Iain M. Banks. He studied English, philosophy and psychology at the University of Stirling. He wrote several novels include: The Wasp Factory, Walking on Glass, The Bridge, Consider Phlebas, Espedair Street, The Player of Games, Canal Dreams, Use of Weapons, The Crow Road, Against a Dark Background, Complicity, Feersum Endjinn, Whit, Excession, A Song of Stone, Inversions, The Business, Look to Windward, Dead Air, The Algebraist, The Steep Approach to Garbadale, Matter, Transition, Surface Detail, The Hydrogen Sonata, Stonemouth, and The Quarry. He wrote other books include: The State of the Art(short story) and Raw Spirit(nonfiction). In 2008, The Times named Banks in their list of "The 50 greatest British writers since 1945".