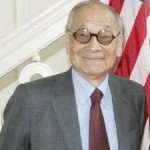 Ieoh Ming Pei, commonly known as I. M. Pei was born in Guangzhou, China. He is a Chinese-born American architect often called the master of modern architecture. In 1935, he moved to the United States. He earned his B.Arch. degree from Massachusetts Institute of Technology in 1940. He earned his M.Arch. degree from Harvard University in 1946. He served as Assistant Professor at Graduate School of Design, Harvard University in 1945-48. His selected edifices include: Dallas City Hall, National Gallery of Art; Washington, D.C., Bank of China Tower; Hong Kong, Louvre Pyramid; Paris, Miho Museum; Kyoto, Japan, Suzhou Museum; Suzhou, China, and Museum of Islamic Art; Doha, Qatar. He received many awards, including the AIA Gold Medal in 1979, the Pritzker Prize in 1983, and the first Praemium Imperiale for Architecture in 1989. In 1992, he was awarded the Presidential Medal of Freedom by President George H.W. Bush.