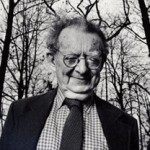 Isidor Feinstein Stone, better known as I. F. Stone was born in Philadelphia, Pennsylvania, USA. He was an American investigative journalist and author. He is best remembered for his self-published newsletter, I. F. Stone's Weekly, which was ranked 16th in a poll of his fellow journalists of "The Top 100 Works of Journalism in the United States in the 20th Century". He studied philosophy at the University of Pennsylvania, and also worked as a reporter for the Philadelphia Inquirer. His career as a journalist began in his second year at high school, when he established The Progress newspaper; later, he worked for the Haddonfield Press and for the Camden Courier-Post. In 1933, he worked as a reporter for the New York Post newspaper. In 1939, after the New York Post , he went to work for The Nation, first as the associate editor, and then as the magazine’s editor in Washington, D.C. He wrote several books include: Business as Usual, The hidden history of the Korean War, The haunted fifties, The Trial of Socrates, and The Best of I.F. Stone.