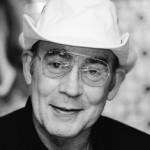 Hunter Stockton Thompson was born in Louisville, Kentucky, USA. He was an American journalist, author, novelist and the founder of the gonzo journalism movement. He worked for several magazines and newspapers include: The National Observer, The Nation, Rolling Stone, High Times, The San Francisco Examiner, The New York Times, and Esquire. He became internationally known with the publication of Hell's Angels. The work he remains best known for, Fear and Loathing in Las Vegas(novel), constitutes a rumination on the failure of the 1960s counterculture movement. He wrote other books include: Fear and Loathing on the Campaign Trail '72, The Great Shark Hunt(essays), The Curse of Lono(memoir), Generation of Swine(essays), Songs of the Doomed(essays), Screw-Jack(short stories), Better Than Sex(essays), The proud highway, The Rum Diary(novel), Fear and Loathing in America, Kingdom of Fear, Hey Rube, and Ancient Gonzo Wisdom.